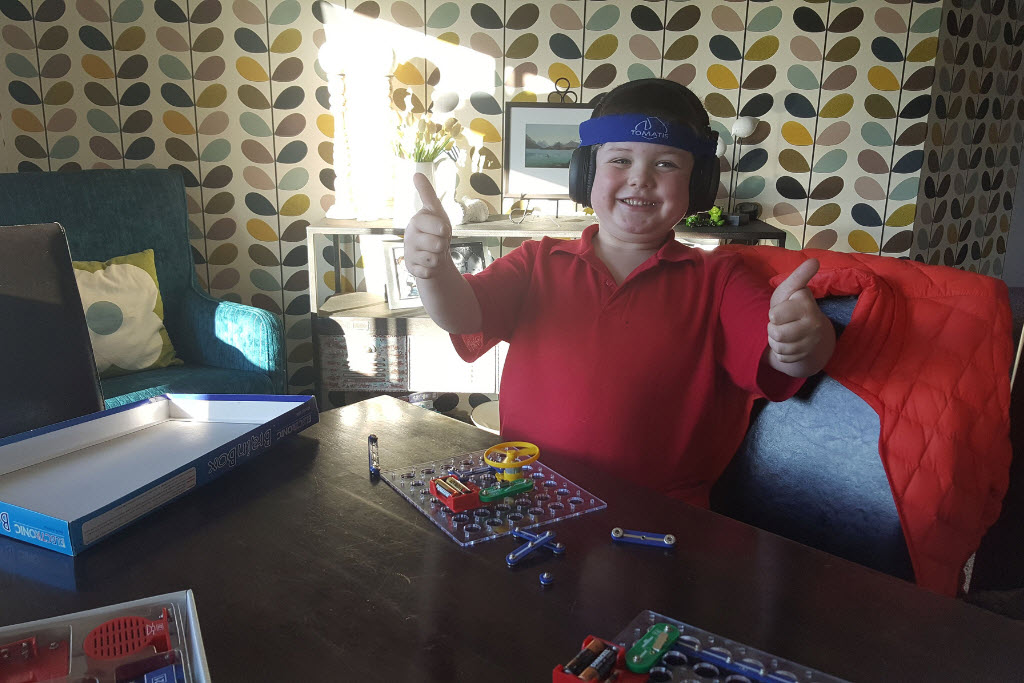 We were looking for childcare for our two children, Michael and Jessica and Pam was the visiting teacher for home based child carers Busy Bodies in Te Anau and not yet a Tomatis practitioner.

Our son Michael at the time was 3 and diagnosed with a severe communication disorder and possible ADHD. He required special supervision and had multiple extra services visit him, such as an occupational therapist, speech therapist and early intervention coordinator, while all under the care of a paediatrician. With the help of these services, his home educator, and the guidance of Pam, Michael started to make some progress.

During 2015, doctors felt that Michael was exhibiting more markers of ASD (Autism) than previous tests had shown. As Michael started school in June, Pam approached us about a new therapy that she had researched and trained in. This was Tomatis, a music therapy that was geared to awakening the brain and making new cognitive connections. I considered this alternative medicine, until I spoke with our GP and she said music therapy and physical therapy were some of the only medically proven therapies, that didn’t involve drugs, that helped children on the spectrum.

Michael began the Tomatis programme with Pam Mitchell during his second term at school. I didn’t think we would make it through one session as Michael didn’t like things on his head, around his ears or loud music, these things could throw him into a meltdown. I was amazed one day when I arrived to pick him up that he was sound asleep. Within days Michael had stopped bed wetting, previous visits to an incontinence nurse hadn’t stopped this. He was now sleeping through the night regularly, for the first time in 5 years. He was generally calmer and had longer periods of focus.

Michael’s speech therapist was astounded by the huge advancement in his oral language in the month between visits. After our second round of Tomatis, she feels his oral language skills were now on par with his peers.

As a trained teacher, I have seen the struggles that many children have with school. The fact that Michael was now achieving, meant he could further concentrate on developing his social skills and continue to be a happy soul.

Our main goal for Michael has always been to be raise someone who can be happy in themselves while also positively contributing to society. Tomatis has been one of the non-invasive things that has allowed us to set along this path. The care, patience and passion for this therapy and her clients that Pam gives is another serious contributing factor.

I highly recommend this therapy and Pam Mitchell, to all ASD parents, as we all know there isn’t anything to lose from our children listening to beautiful, peaceful music every day. You will be amazed at the positive changes it will make to your whole family.

No bed wetting and Michael typically achieves academically at his expected level. I had to place him lower for writing only because he doesn’t do well in testing situations for writing. Still amazing memory and can typically remain on a task the same as his peers .

I totally rate Tomatis as setting him on the right track!

To get more information of the impact of the Tomatis® Method, you can find examples here: Glimpses of change.